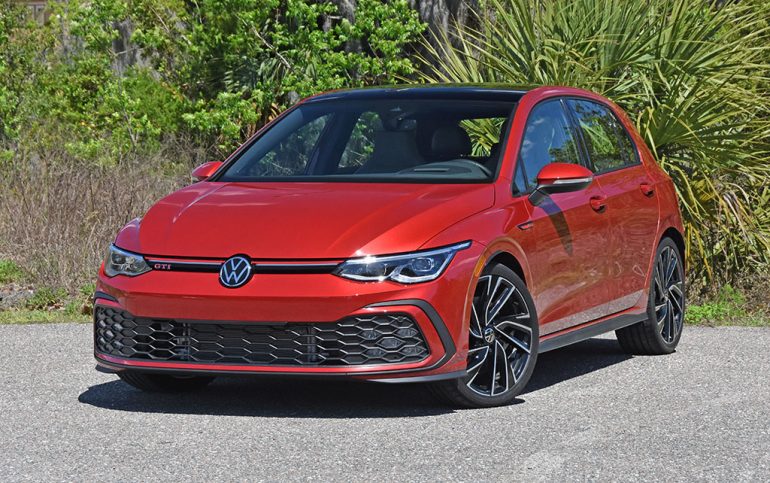 The Volkswagen Golf GTI has been a benchmark for hatchbacks and for the 2022 model year it gets a full redesign but retains the enjoyable hot-hatch character that enthusiasts have enjoyed for over four decades. Marking its 8th generation, the 2022 VW Golf GTI remains to be a little thrill ride wrapped up in a hatchback package with many attractive tweaks that have polished an already-great formula but has one fault that’s hard to overlook.

The 2022 Volkswagen Golf GTI Autobahn builds upon the Golf recipe to add a little spice where you get a reworked 2.0-liter turbocharged 4-cylinder engine that’s good for 241 horsepower and 273 pound-feet of torque. Best of all, at least for enthusiasts, the new Golf GTI can be had with a 6-speed manual transmission. My test vehicle comes equipped with the seamless-shifting 7-speed DSG dual-clutch automatic with steering wheel shift paddles, which is a welcomed option considering how fast it fires off shifts without upsetting the strong front-wheel-drive pulling power of the turbocharged engine. In fact, the engine feels as it is much stronger than the power figures stated on paper. Zero to 60 mph ticks off in just 5.1 seconds. 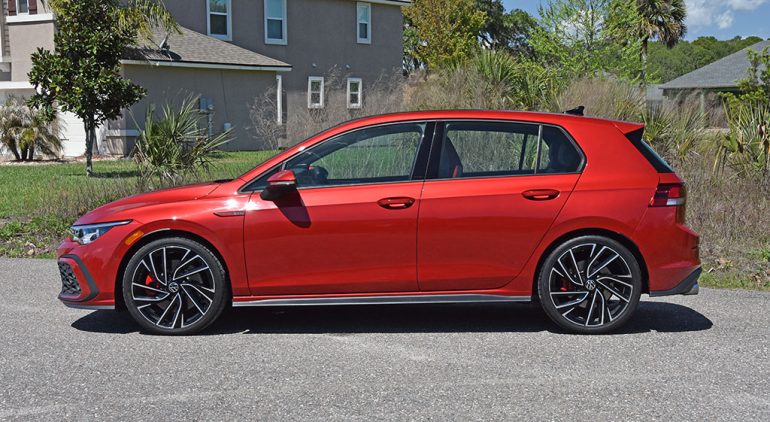 The driving character of the new VW GTI always feels lively with minimal turbo lag out of the hole. The handling, partly thanks to the GTI Autobahn’s DCC (dynamic chassis control) adaptive damping system that allows several settings through the custom drive mode, is excellent and feels almost like the GTI is hooked on rails. The turn-in is quick as is the exceptional short ratio steering rack that actually has a small bit of feedback sent through the electric assist. Having a torque-sensing limited-slip VAQ differential up front helps power the GTI Autobahn through turns and lay down even power in a straight line without fail. The limited-slip VAQ diff, which is an electronic intervention type setup using the stability control systems instead of a mechanical type, magically prevents some understeer when you really push the GTI Autobahn through turns with moderate to full applications of power. 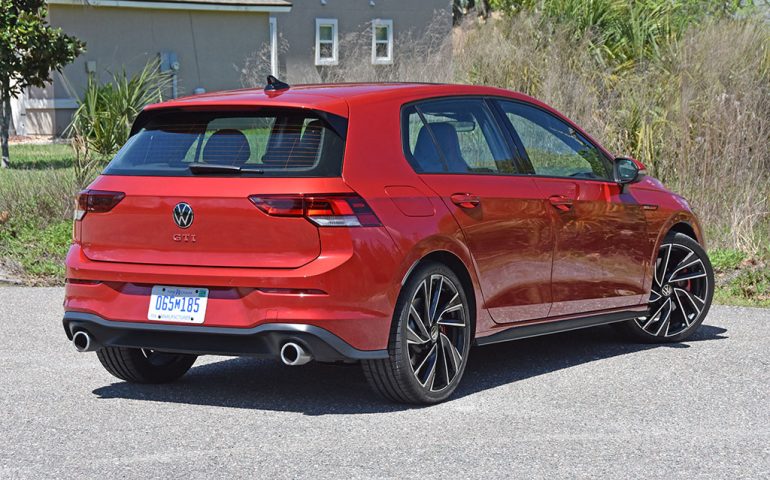 The overall ride quality can be a bit jouncing but is somewhat mitigated with an agreeable smoothness when you put the dampers in their softest setting or enable the Comfort drive mode. The low-profile 19-inch tires optioned on my test vehicle only exacerbate a stiff ride when the dampers are in the firmer setting, or when using the Sport drive mode which also firms up the dampers. 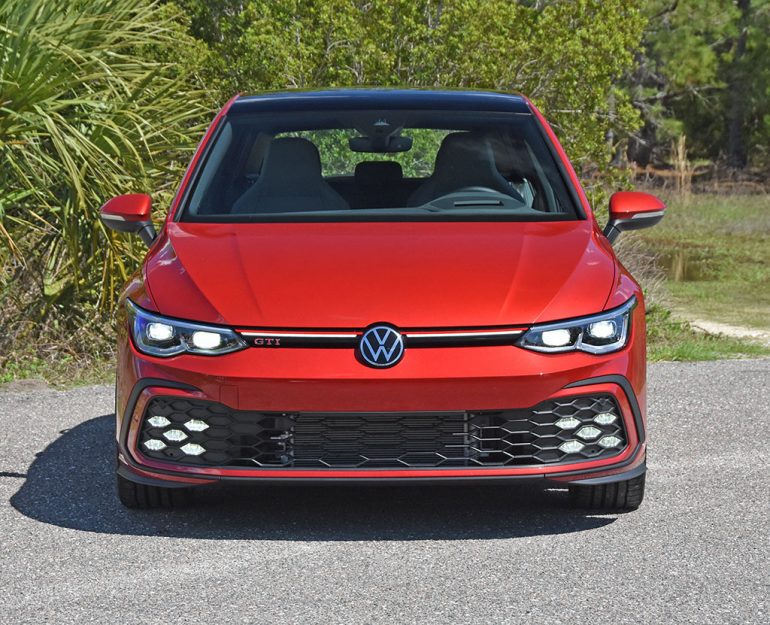 There’s something special about the way the new 2022 VW GTI Autobahn handles itself and somewhat promotes you to drive like a hoon. It feels light on its feet and there’s a new welcomed balance of the chassis where it feels if it can easily handle additional power, which can be found in the new top-of-the-shelf 315-horsepower Golf R. The weight of the new GTI is down from previous generations thanks to a new aluminum subframe. Overall, the dynamics of the new GTI have been dialed in perfectly in my summation making it among the best driving modern hatchback for your money. 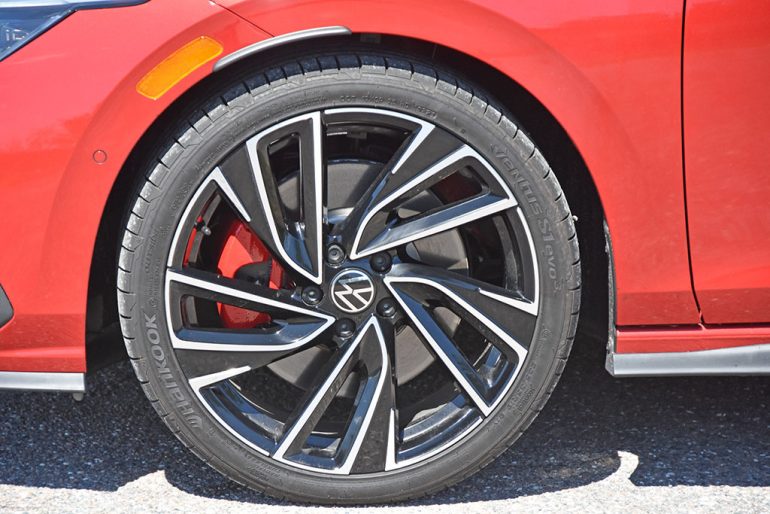 With power output being increased over the outgoing Golf GTI generation (228hp/258tq vs 241hp/273tq) it’s surprising to have much-improved fuel consumption with my new 2022 GTI with the 7-speed DSG matching its EPA estimates of 25-mpg city, 34-mpg highway, and 28-mpg combined. That’s a nice improvement over the outgoing Golf GTI with its 24-mpg city and 32-mpg highway figures.

The interior has a nice seating layout with unique perforated leather sports seats that are nicely bolstered and incorporate heating and ventilation. The seating space accommodations are good and make wise use of the hatchback form with plenty of front-seat travel and space for people who are over 6-feet tall like me, in addition to having decent rear seat space in the heated rear outboard seats. There’s also welcomed attention to detail aspects of the interior and exterior when it comes to lighting elements with the multi-color-configurable ambient LED interior lights and the unique LED lighting areas of the front grille, the cute honeycomb LED foglights, and the remarkably bright adaptive LED headlights with auto highbeams. 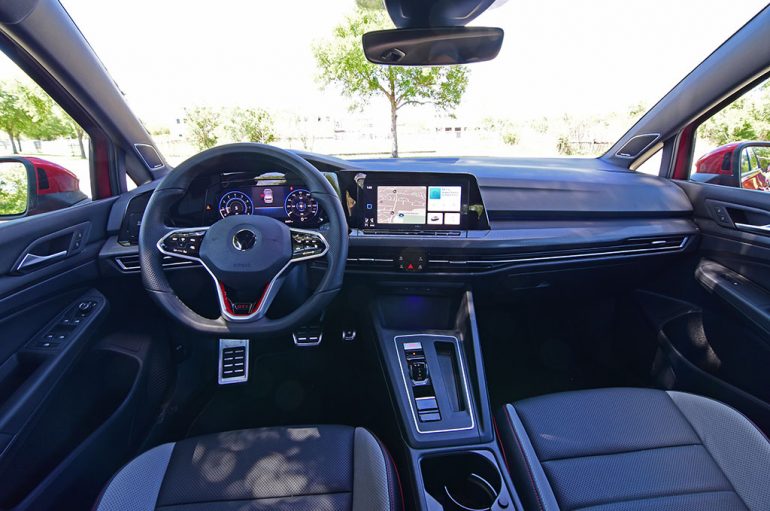 Where things start to go off the rails is in the department of the updated tech. The new Volkswagen Golf GTI Autobahn lacks any physical buttons or knobs and instead opts for a slew of capacitive touch buttons and areas that play into a trap of being part of one of the worst modern-day infotainment systems around. The only physical switches are the window switches and the only knob you’ll find to adjust the power rearview mirrors. Unfortunately, the new 2022 VW Golf GTI Autobahn and other Golf family vehicles with the new updated infotainment system and its 10-inch Discover Pro capacitive touchscreen have a never-ending learning curve and cumbersome interface. There is a natural voice control system that can be prompted by saying “hey Volkswagen” but it’s recognition is slow and often fails to recognize your voice command accurately. 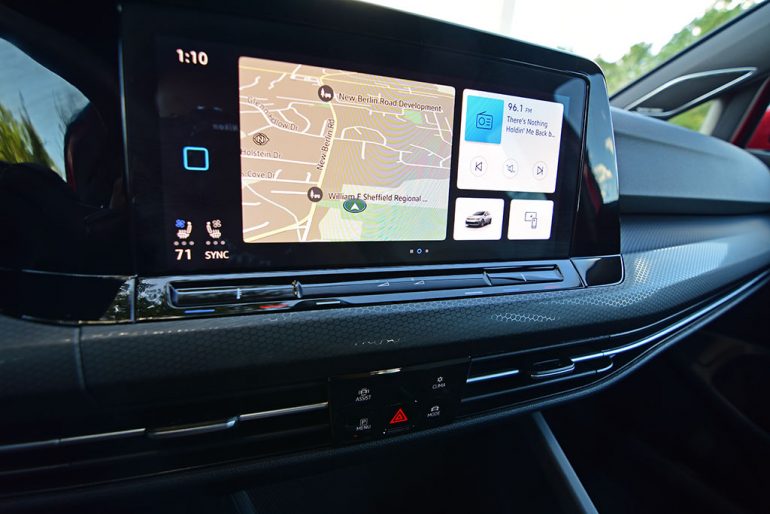 While the touchscreen can handle most interactions and vehicle settings, there’s a rather small touch-capacitive area for the volume control and temperature control that is often too sensitive and difficult to use. Not to mention, those controls do not light up at night leaving you to guess where to place your finger to do something as simple as turn up the volume or adjust your climate temperature. I’m not quite sure with Volkswagen was thinking here, nor am I sure that having such a limited amount of touch buttons is conducive to keeping your focus on the road. I even had a hard time finding the menu to disable traction control, which is hidden in the “Exterior” vehicle settings menu under “Braking.” Utterly ridiculous! 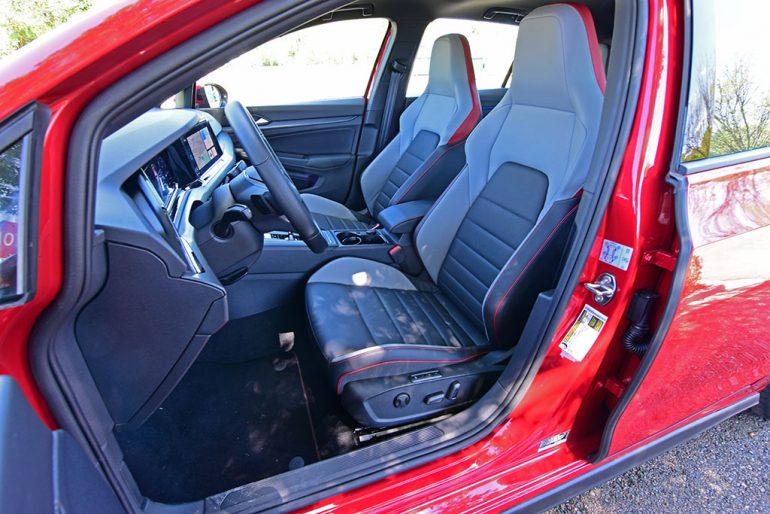 There’s a set of other touch capacitive buttons on the dashboard in the center for bringing up the climate controls, driver-assist features, parking assist functions, and the drive modes. Otherwise, you’re left to interact with the touchscreen to bring up other controls, which appears to be a simple process at first, but mass confusion ensues upon digging into menu sets where features seem to be a jumbled mess. Even the headlight controls oddly grouped with front and rear defrost buttons on the left of the 10.25-inch virtual cockpit gauge cluster are touch capacitive and fail to respond to your press at times requiring repeated pressing. 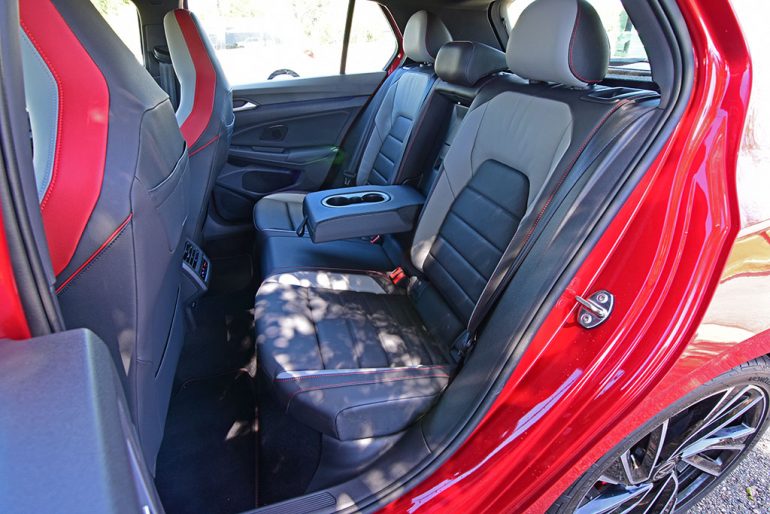 It’s obvious that Volkswagen attempted to make the dashboard a minimalist design but majorly failed to consider user-friendliness or the avoidance of distraction, even if some of the menus lock you out upon driving. It’s rather a shame that the infotainment system is such a disaster because the new VW Golf GTI Autobahn is such a joy to drive, quite accommodating with its seats, and offers versatility and added cargo room of a hatchback. There’s the expected set of active driving safety features, including adaptive cruise control, blind-spot monitors, forward collision warning with emergency braking, and lane departure warning/keep assist. The GTI Autobahn also gets a color heads-up display. 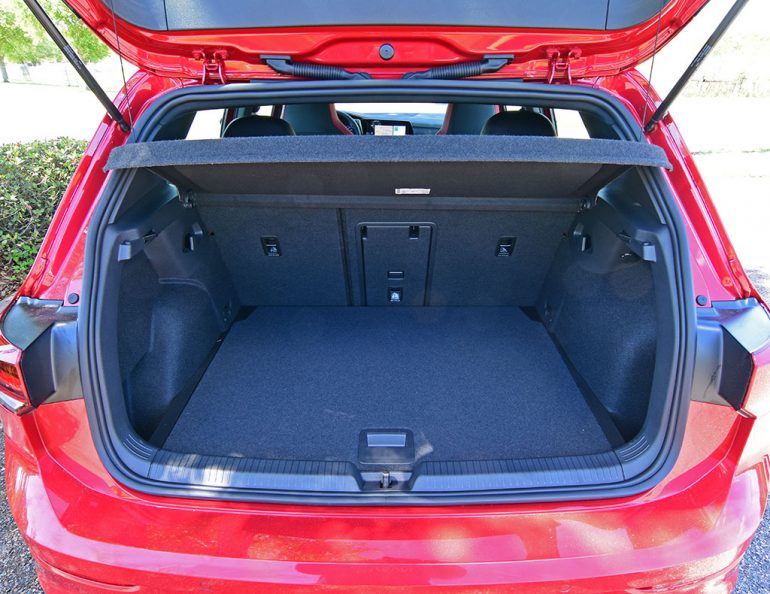 At the starting price of $29,545, the new 2022 VW Golf GTI is a good buy when you consider the collective of its sporty driving traits, the versatility of a hatchback, and the attention to detail in many of its unique styling elements. Opting for the 2022 Golf GTI Autobahn just like my test vehicle with the 7-speed DSG automatic transmission, which comes equipped with all the available features for the GTI this year, will set you back $39,385 including a destination charge of $995.