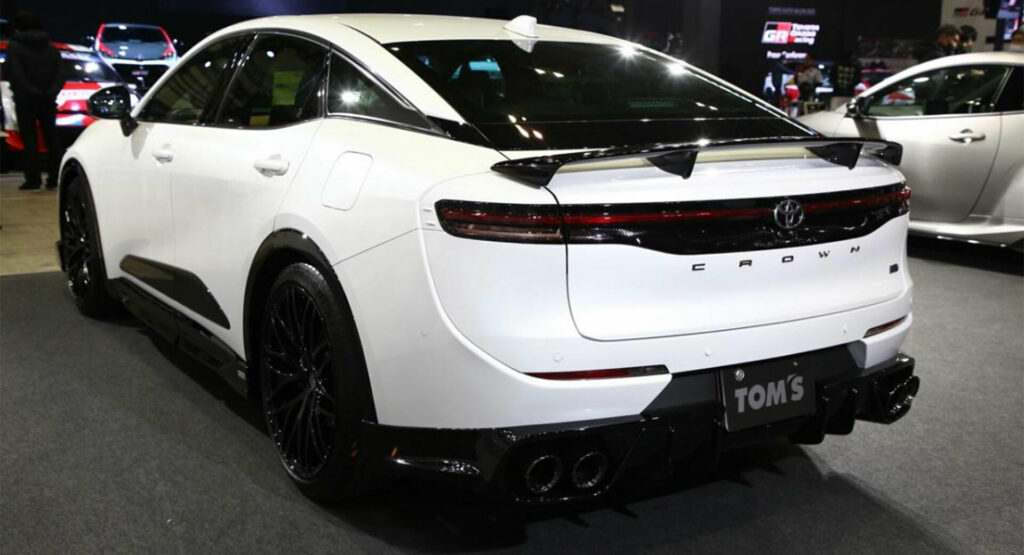 The Tokyo Auto Salon attracted a host of tuned Toyota Crown models this month and these are some of those that were displayed.

The first one pictured is based on the Crown sedan and was built by Tom’s Racing and KeePer. The alterations made are much more subtle than those developed by Modellista and see the white sedan wearing a more pronounced front splitter, sitting on a set of gloss black aftermarket wheels. Out back is a fixed rear wing, a diffuser, and quad exhausts.

Blitz also brought along a Toyota Crown to the Tokyo Auto Salon, albeit the Crossover variant. It too is rocking a customized front fascia with a new splitter and sits on new wheels with black and silver spokes. Blitz has also installed new rocker panels and made some minor tweaks to the crossover’s rear-end.

Driven: The 2023 Toyota Crown Is A Hybrid, Hail Mary Pass For Mainstream Sedans

M’z Speed’s take on the Toyota Crown Crossover is more striking. It has been fitted with a custom front bumper with a rugged-looking element directly under the grille. A set of black wheels are also visible and have been wrapped in Nitto tires with prominent white lettering. Rounding out the changes is an aggressive diffuser and quad tailpipes.

Rounding out the customized Crowns present in Tokyo is one from Aimgain. Known as the VIP EXE package, it benefits from a suspension lowering kit and also rocks some new wheels. Aimgain has also extended the side skirts and outfitted the rear end with a new diffuser and dual chrome-trimmed tailpipes. Of all the kits presented so far for the new-age Crown, it is perhaps the most refined.