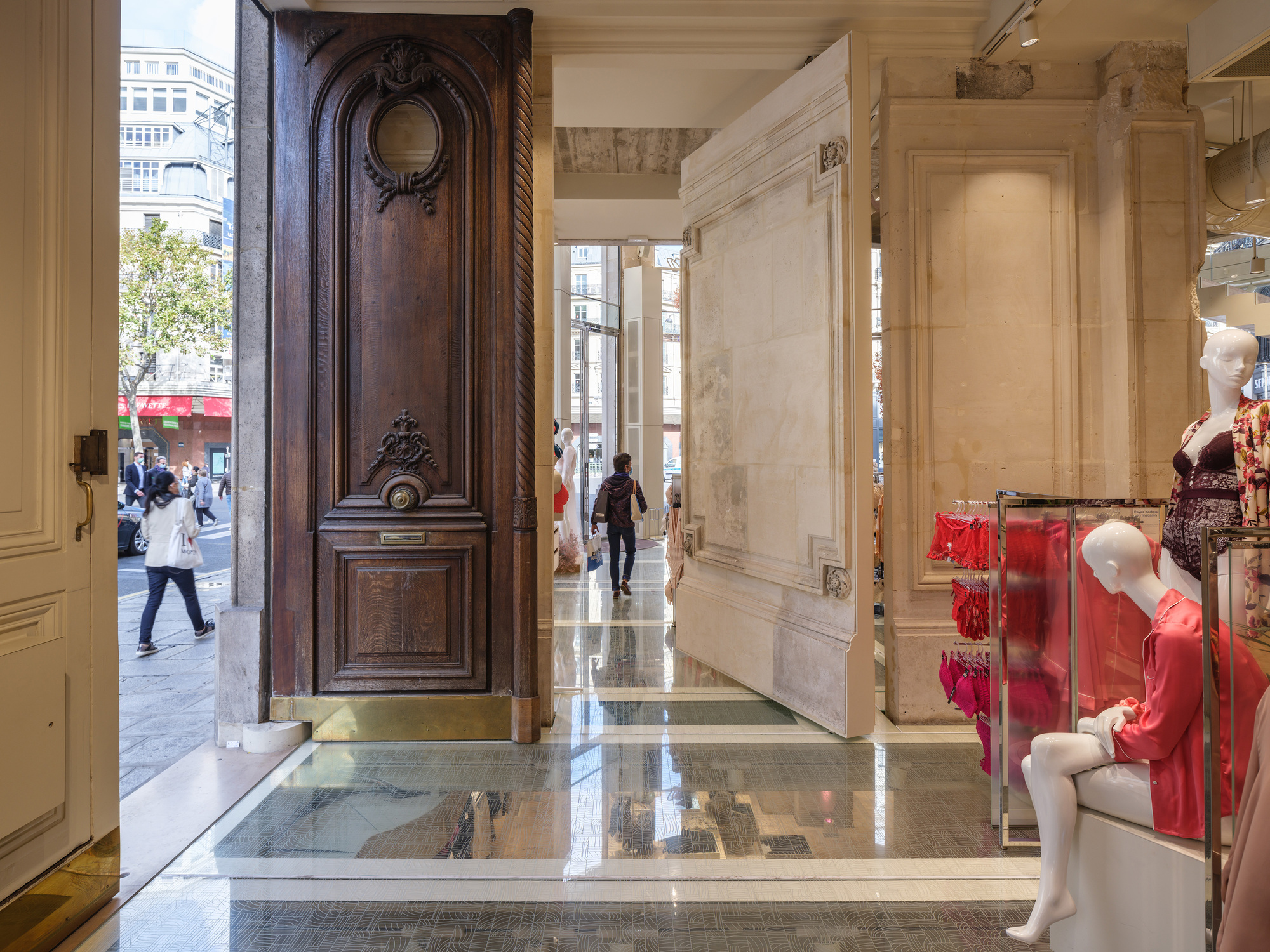 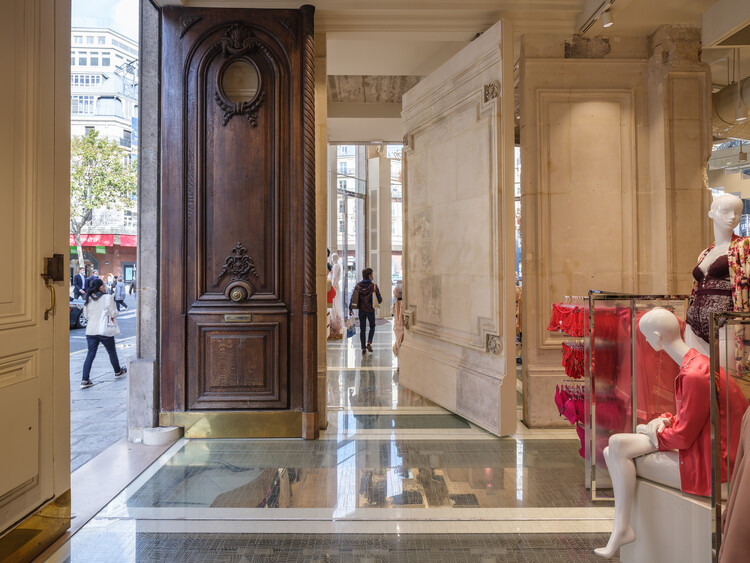 Text description provided by the architects. The project occupies a corner site on Boulevard Haussmann directly across from the Galeries Lafayette department store, in one of the prime shopping locations in Paris near the Opera Garnier. MVRDV’s design takes advantage of the building’s wedge-shaped floor plan by stripping back the exterior as much as possible – highlighting the building’s clean classical appearance, allowing plenty of light to enter the Etam store from both sides, and creating large windows for display.

This “stripped down” approach continues to the interior, where the design reveals the original stone structure in an elegantly simple way – removing a part of the entresol floor above and most of the interior walls. The most striking alteration is a glass floor at ground level, which allows light to penetrate to the basement level and makes a visit to Etam’s store a captivating experience as visitors see products and people on the level above or below. This floor is treated with a special film that makes it transparent when viewed at an angle but clouded when viewed from directly above or below, providing privacy and preventing vertigo for those standing on the glass floor. This creates a direct reference to the lingerie on display; at once revealing and yet respectfully modest.

The basement is accessed by a grand central staircase. These stairs, as well as the flooring of the basement level and the back of the ground level, are finished with a light-colored wood laid on its end, inspired by the “pavé en bois debout” cobbled streets that were widely used in Paris in the 19th century. The pattern created by this flooring was also developed into the non-slip pattern applied to the glass floor, unifying the two flooring types into a single whole.

The preservation and modernization of existing buildings serve as a key sustainability strategy for MVRDV. Renovating buildings avoids the embodied carbon incurred in building a new structure. The approach is also culturally sustainable: preserving heritage ensures cultural continuity while being open to carefully considered yet bold modifications that allow a building to evolve with the times.

One element stands out as a prime example of the project’s simultaneous commitment to preservation and renewal. During the demolition of the building’s interiors, a section of an original wall within the building was uncovered. Although there was no question that this historical element deserved preservation, it also presented a significant obstacle within MVRDV’s open floorplan concept. Taking inspiration from the work of artist Gordon Matta-Clark, the design team worked with stone experts to transform the wall section into a five-tonne pivoting “doorway”, preserving the openness of the store’s floorplan, but always with the option for the historical wall to be simply rotated back into place.

The peninsular urban setting of the store has already been taken advantage of for an event during Paris Fashion Week, in which the store became a stage set and the surrounding sidewalk a runway for the fashion show. For such events, the Haussmannian façade provides a classical backdrop but it also offers a contemporary feeling with its sober and almost invisible additions.

The Rural vs. The Urban: The Postcolonial City of Dakar in the Film Touki Bouki