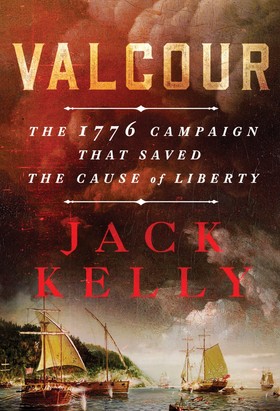 Jack Kelly, the author of the book Valcour: The 1776 Campaign that Saved the Cause of Liberty.” speaks at the NY State Military Museum on March 19 at 2 p.m.

SARATOGA SPRINGS, NEW YORK (03/14/2022) (readMedia)– The Battle of Valcour Island, a naval battle fought on Lake Champlain by a fleet commanded by Benedict Arnold, is the subject of a free talk at the New York State Military Museum on Saturday, March 19 at 2 p.m.

Before he was a traitor, Benedict Arnold was a hero of the American Revolution and the naval battle he fought on Lake Champlain in 1776 delayed a British invasion from Canada for a year.

Author Jack Kelley will talk about the history of the battle that is outlined in his book “Valcour: The 1776 Campaign that Saved the Cause of Liberty.”

In the spring of 1776 a British Army in Canada was poised to advance down Lake Champlain towards Albany. To stop them the American Army began building gunboats at what is now White Hall, New York. This forced the British into their own shipbuilding effort.

In October of 1776 the British fleet advanced down Lake Champlain and were met with the American fleet led by Arnold at Valcour Island near Plattsburgh on October 11, 1776.

The battle was a tactical defeat for the Americans, but the British invasion of New York was postponed until 1777

Kelly will give an account of this nail-biting story and explain its importance for the Revolutionary War. He will discuss the people who made the result possible: the Albany aristocrat Philip Schuyler, the resourceful Horatio Gates, and Arnold, the tactical genius.

Kelley is also the author of “Band of Giants: The Amateur Soldiers Who Won America’s Independence” which received the DAR History Medal. He has written nonfiction books about the Erie Canal and the Gilded Age, and has published five novels.

A New York Foundation for the Arts fellow in Nonfiction Literature, he has written for many national publications, and has appeared on The History Channel, National Public Radio, and C-Span. He lives and works in New York’s Hudson Valley.

The New York State Military Museum and Veterans Research Center is located at 61 Lake Avenue in Saratoga Springs. The museum is maintained by the New York State Division of Military and Naval Affairs with the mission of telling the story of New Yorkers in our nation’s conflicts.

The talks are sponsored by the Friends of the New York State Military Museum with support from Stewart’s Shops.

For the first time Ukraine use American HIMARS MLRS against Russia