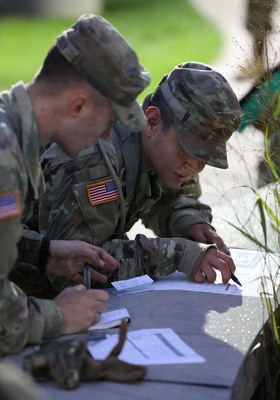 Soldiers work on a land navigation problem during a Best Warrior competition held in Western New York in October 2021.

Reporters are welcome to cover the start of the three-day competition.

Reporters will be able to speak briefly to Soldiers participating in the event and the non-commissioned officer in charge about the competition. Visual opportunities include the UH-60 arriving from Army Aviation Support Facility 3 in Latham and Soldiers starting the land navigations course.

The Best Warrior competition is an annual event in which Soldiers from across New York compete at their local units before going onto a statewide competition held later this spring at Camp Smith Training Site.

The winners of that event compete regionally with the chance to compete nationally. In 2021 New York Army National Guard Corporal Dakoatah Miller finished in second place in national competition.

Soldiers are judged on tasks that can range from assembling and disassembling a machine gun, emplacing a land mine, navigating at night and during the day with map and compass, to treating a simulated casualty.

The event also includes a 12-mile forced march in which Soldiers must carry a 35- pound pack and a weapon, held this weekend in the Albany Pine Bush Preserve.

The headquarters is designed to provide mission command for up to four aviation battalions and an aviation support battalion. The brigade’s New York units had 1,043 Soldiers assigned at the end of fiscal year 2021.

The Brigades major elements include the 3rd Battalion, 142nd Assault Helicopter Battalion, which is headquartered at Ronkokoma and the 642nd Aviation Support Battalion.

Since Sept. 11, 2001, brigade elements have deployed to Iraq and Kuwait in support of U.S. military operations.

For the first time Ukraine use American HIMARS MLRS against Russia