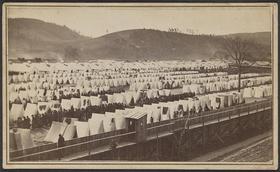 The Union Army prisoner of war camp in Elmira, New York, pictured here, is the subject of a free talk at the New York State Military Museum on April 2.

SARATOGA SPRINGS, NEW YORK (03/22/2022) (readMedia)– The history of a Civil War prison camp run by the United States Army in Elmira and nicknamed “Hellmira” by the Confederates imprisoned there, is the subject of a free talk at the New York State Military Museum at 2 p.m. on Saturday, April 2.

Derrick Maxfield, an associate professor of history at Genesee Community College in Batavia, and the author of the book “HELLMIRA: The Union’s Most Infamous Civil War Prison Camp – Elmira, NY” will present the illustrated talk.

The Union-run prison has been compared to the infamous Andersonville Prison in Georgia where Union prisoners of war starved to death. The commander of that camp was court martialed and hung after the Civil War ended.

The Elmira camp was constructed in the summer of 1864 after U.S. Army General Ulysses S. Grant decided to stop exchanging prisoners of war. He had determined that this practice aided the Confederacy.

The Union Army needed places to house those prisoners and one of them was Elmira. The camp, like other Civil War prisoner of war camps, was hastily constructed and poorly planned and Confederate soldiers, unused to harsh upstate New York winters suffered dreadfully.

Maxfield’s talk will discuss the history of the Civil War prison camps and put the Elmira camp into context with what was going on at the time.

Maxfield, who was honored with a SUNY Chancellor’s Award for Excellence in Teaching

The talk is one of a series of free presentations sponsored by the Friends of the New York State Military Museum and Stewart’s Shops.

The last talk will be on Saturday, April 30 and focus on the liberation of the Dachau Concentration Camp during World War II by the 42nd Infantry Division, which is now part of the New York Army National Guard.

The New York State Military Museum and Veterans Research Center is located at 61 Lake Avenue in Saratoga Springs. The museum is maintained by the New York State Division of Military and Naval Affairs with the mission of telling the story of New Yorkers in our nation’s conflicts.

How did Russia using the same missiles against Ukraine after purchasing them from Ukraine?

Filings buzz in the aerospace and defence sector: 13% increase in robotics mentions in Q1 of 2022