Spare Ribs, Sleaford Mods sixth full length studio album, is a thirteen track record born out of a social commentary that forms the very ethos of the band. Sick of Tory rule, monetary policy, inept leadership, capitalism and being left to feel expendable has fuelled the latest album from Jason Williamson and Andrew Fearn. 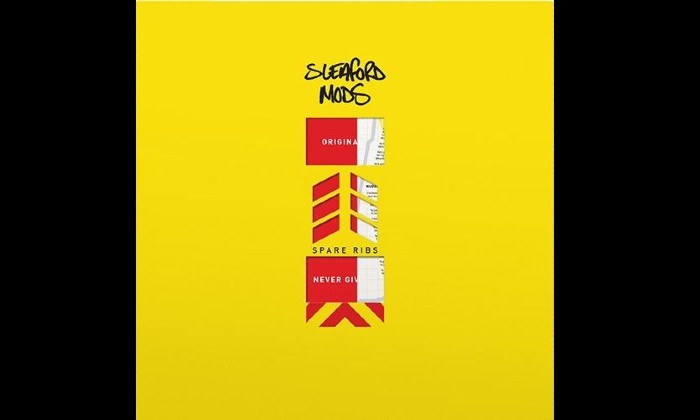 Sleaford Mods recorded the new album in the middle of last year, over the course of three weeks, at an old fruit and veg warehouse turned DIY music and arts space near Sneinton Market in Nottingham. This time around the East Midlands duo have also enlisted the talents of Billy Nomates on the lead single Mork n Mindy as well as Amy Taylor, vocalist of antipodean punks, Amyl and the Sniffers, on Nudge It.

Spare Ribs comes less than a year after the release of the compilation album All That Glue and two years after arguably their biggest record to date, Eton Alive. Singles taken from that album, Kebab Spider, Discourse and O.B.C.T  helped raise Sleaford Mods profile to new heights and ensured far more air-play. The often visceral, raw and pointed lyrics paired with an EDM or Hip-Hop soundtrack is now a familiar trademark sound that Sleaford Mods have made all their own and on Spare Ribs they’ve enhanced it.

Jason opens the album as a “circus master” introducing us to the record with a spoken word 44s intro that acknowledges, “And we’re all so Tory tired, and beaten by minds small”. The Tory thread continues on Short Cummings, a track underscored by a walking bass line (akin to one of Jean-Jacques “JJ” Burnel’s) and a snare beat. Jason’s distinctive East Midlands accent, which I’m sure he over eggs at times, continues to add a snarly, agitated and generally p****d off bite on the new material.

The collaboration with the Sniffers Amy Taylor makes for an interesting listen partly because of the stark difference in the vocals, although both Jason and Amy sound as impassioned as each other during their embittered duet. Elsewhere on Spare Ribs we almost here the Human League’s The Sound Of The Crowd on Elocution. The electro driven soundtrack is the base from which Jason builds as he gets as close as he ever does to an accepted norm of singing.

Top Room is more spoken word than song, more like a free flowing John Cooper Clarke imparting a stream of discontented  consciousness, barely pausing to gather breathe as he struggles to contain it all. The title track, Spare Ribs, however is an upbeat, almost funky affair that would no doubt lend itself to a 12″ remix. Dare I say it, Spare Ribs is Sleaford Mods doing something approximating Pop!

Spare Ribs, the album, once again highlights Sleaford Mods ability to draw on themes lifted from popular culture, whether that be Action Men, Cindy, Porn-Hub, Tesla, Total Control Racing or BHS. Each reference brings a heightened sense of realism and truth to each song as Jason imparts his continuing dismay and displeasure. During the thirteen tracks Sleaford Mods leave you in no doubt as to their political leanings, or how strongly they feel about various subjects. Jason touches on unemployment, racism, institutions, non-creatives and even acid rain over the course of the entire album, as well as continually showing disdain and intolerance for the Tories. His heartfelt vitriol is what drives the impassioned performance on ‘Spare Ribs’ and it’s what makes it such a compelling tour de force.

Check Out Tatiana Maslany Twerking Behind the Scenes