Goat Girl follow up their terrific eponymous debut album from 2018 with their second, On All Fours. The South London former Post-Punk quartet comprised of Lottie, Holly, Naima and L.E.D. delighted critics and fans alike with their first album and are once again hoping to challenge and surprise with their latest. 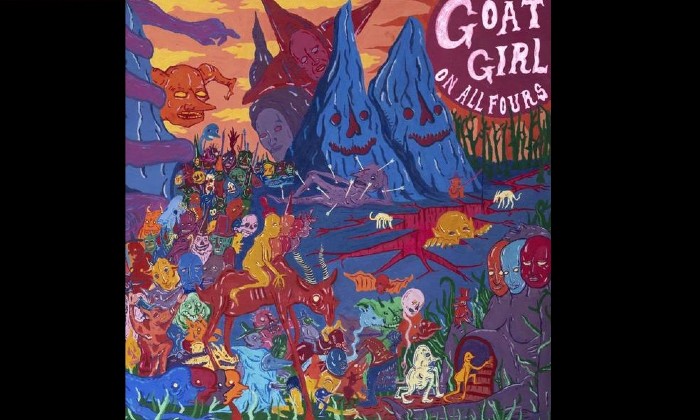 Managing to keep a wry sense of humour and political commentary coursing through their material Goat Girl have produced some of the most creative, original and alternative music of recent years. Goat Girl’s second album however, “veers away from confrontational lyricism” and uses “music to explore humanitarian, environmental and mindful wellbeing”! All grand ideas concisely explained through the band’s latest idea of a vision statement, but does that translate into any good music?

Goat Girl have already premiered three of the album’s tracks ahead of it’s release with both Sad Cowboy and The Crack being respectively released in September and December last year and Badibaba one week ahead of the album release. Whilst Sad Cowboy was more in keeping with the sound the girls had created on their first album, The Crack was altogether different, slightly more experimental and vaguely psychedelic.

The inclination to take the path less travelled or throw in a curve ball now and then should come as no surprise really. Goat Girl’s debut album interpretation of the much loved Bugsy Malone song, Tomorrow, is nothing short of inspired. Their version, upon first hearing, is barely recognisable from the original, it’s so different but it works as a wonderfully weird cover.

On All Fours opens up with Pest, a song that starts with minimal instrumentation and a melancholy vocal, at first as a solo, but then as a layered harmony. As the song progresses through a slow, moody bass-line it begins to build very gradually, eventually manifesting itself as an electro-enhanced Indie floor-filler.

The latest single, Badibaba, is initially a lighter, snare driven song with a staccato rhythm playing under the synth loops where as Jazz (In The Supermarket) employs the use of scuzzy horns and various percussive elements to help it along. The largely instrumental track has a fusion of influences, including World and Folk music, all syncing together somehow to produce the resultant track.

Once Again is a Funky little number with a breezy vocal treatment and Closing In brings forth a French flavour to add to the revolving steel guitar sound and playfully set beat. Anxiety Feels is even more relaxed and mellow with a soulful, smooth, almost R&B vibe where as They Bite On You relies more heavily on it’s harmonies and layering to compliment the bass and drum backing. The close out tracks, Bang, Where Do We Go and A-Men are similarly derived using a layer of harmonies, synth hooks and creative percussive touches.

The thirteen tracks of the new Goat Girl album are influenced by a cornucopia of styles and sounds including psychedelia, electronica, R&B and even Bosa Nova. The band have been true to their word when they’ve said that they’ve used “music to explore” and have “veered away from conventional lyricism”. Goat Girl have given us a break from the norm on their latest album, they’ve not been satisfied with remaining the same and they’ve dared to be different. On All Fours is not a Post-Punk album, it’s an album of exploration and experimentation from a group that look set to be forever challenging.