PLOT: In the 1950’s a loving housewife begins to question the community where her and her husband live a strangely “perfect” life.

REVIEW: There’s been a lot of chatter about the behind-the-scenes of Don’t Worry Darling. The Olivia Wilde directorial effort showed promise with its first trailer but became gossip fodder. That had little effect on my viewing of the film. Instead of reading about the insanity on the set, I just waited to see what would eventually find its way to the theatre. After all, you often hear stories about problematic features that exceed all the negative press. Sad to say, this is not one of those films. The tepid thriller (?) features Florence Pugh, Chris Pine, Harry Styles, Gemma Chan, and more, and it’s not that thrilling.

When we first meet Alice Chambers (Pugh), she is happily married to her husband, Jack (Styles). The two share an idyllic marriage during the 1950s. Yet, when one of her friends begins to show scary signs of insanity, Alice begins questioning what happened to her in this perfect community. Things get even more bizarre when she witnesses something that most people would be shocked to see – a plane crashing into the hills. Yet the one person with her seems utterly disinterested in the event. It all leads to twisted tale where Alice begins to question everything around her.

One thing the film does right is that it creates an intriguing look to the weirdness. Wilde and her DP Matthew Libatique offer striking and visually impressive images. It’s a pretty film, and the 1950s atmosphere and color scheme are both smartly designed. The look of this feature, the soundtrack, and the costume and set design all work well. There are numerous ideas here that could have added beautifully to this surreal tale. It’s certainly an ambitious film, and that is nearly always appreciated. Sadly, all the good ideas feel wasted in a dull, lifeless, and ultimately (for me anyway) predictable feature.

The other main attraction is Florence Pugh. The actress is terrific, whether in her housewife mode or when she begins questioning the world around her. Ms. Pugh is a fantastic talent, and she can give life to the troubled Alice. As for her co-stars, Harry Styles does a fine job as the wealthy and successful husband, Chris Pine is a curious choice for his contribution, and Ms. Wilde has a bit of fun with her nosy neighbor turn. And Gemma Chan brings a bit of fierceness to her work. The actors deliver but as good as that can be, and as engaging as the look of the film is, it’s a massive bore.

While I happily praise the look of the film to an extent, it was also a problem for this viewer. The symbolism ofter feels repetitive and evident as the story plays out. I remain vague about the plot because the comparison to other features would give this away instantly. Even with a bit of style, the repetition gets a little stale. The filmmaker’s intention is clear, but audiences don’t always need it to be as over-the-top as it is here. And while it’s easy to appreciate the film’s commentary, it’s not successful at making you care. The ideas are here; however, how its approached feels illogical, messy, and dull.

Don’t Worry Darling is a good attempt at doing something different for Olivia Wilde as a director. As good as the visuals and some of the performances can be, it doesn’t make for an interesting film. The idiotic choices made by the protagonist are frustrating. Yet pretty much most of the character choices here are pretty damn annoying. It may end up being a film that speaks to some, but ultimately it seems this lifeless feature is in danger of only being mired in controversy, which is a shame. If you have any interest in seeing it for yourself, you should. Ultimately though, from my perspective, this is just messy and dull. Don’t Worry Darling is finally hitting theatres tomorrow; let’s see if the bad press brings out the curiosity in fans. 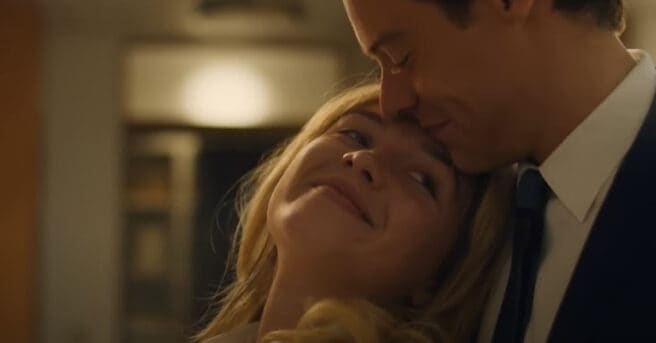 Smile coming in first with $19 Million

Why business leaders should take an active role in preserving democrac

Smile coming in first with $19 Million

Stay at the Sanderson Sisters’ Hocus Pocus cottage this fall

Why business leaders should take an active role in preserving democrac

How to Leverage Robotics to Promote Your Manufacturing Day