PLOT: A look behind the scenes at the music of 007, from the crafting of theme songs to the scores themselves.

REVIEW: I think the first time I ever noticed film music was in a James Bond film. My love of the James Bond film series has been well-documented here on JoBlo. After all, Nick Bosworth, our director of YouTube Operations, and I did a whole series about the 007 franchise – James Bond Revisited. But, one of the areas he and I always wanted to explore was the “James Bond sound,” most notably the music and work of John Barry. Indeed, the franchise as it exists today would not have survived were it not for the Barry sound. Everyone credits Monty Norman as the composer of the James Bond theme, and there’s some truth to that. Still, the orchestration by John Barry with the distinctive guitar playing by Vic Flick defined the character in just as big of a way as Sean Connery did as a performer.

In Prime Video’s The Sound of 007, Eon takes us behind the scenes as they craft the score and theme song for No Time to Die. In some ways, it feels about a year too late, as it’s very much a promo piece for the final Daniel Craig Bond film. Still, I imagine MGM was saving it to celebrate Bond’s 60th anniversary, which is actually October 5th, 2022, the day I’m writing this review.

If you’re a hardcore 007 fan, The Sound of 007 doesn’t relay any new information. They’re somewhat towing the company line here, so they don’t get into the real squabbles over the Bond theme ownership over the years. They also focus a lot on No Time to Die but, curiously, feature very little involvement for Cary Fukunaga, who’s since been the subject of some rough accusations, making me think he was sidelined here. Sam Mendes, who directed Skyfall and SPECTRE, seems to weigh in the most on No Time to Die and were someone none the wiser, they might think he was the director.

That said, The Sound of 007 is still a worthwhile documentary, as it does a good job celebrating the legacy of the 007 soundtracks. The argument made here, and it’s a good one, is that Barry’s work on the Goldfinger soundtrack and Shirley Bassey’s title song set the tone for the franchise, and the composer more than gets his due. There are even a few allusions to the fact that he could be difficult, with John Taylor from Duran Duran affectionately calling him a “dick” and Shirley Bassey saying she hated the theme song to Moonraker so much that she’s never sung it in concert.

The filmmakers never pretend that every song is a hit, with the lyricist behind Octopussy‘s “All Time High” defending his “nice” song (I love it), while Jack White admits a lot of people hated what he did for Quantum of Solace. The band Garbage is interviewed, and they mention that people, in 1999, really didn’t care for their World is Not Enough theme song, although the stance seems to have softened over the years.

Most intriguingly, the movie features some bits about the Bond songs that never made the cut, with Radiohead’s rejected song for SPECTRE a sore point for Mendes and Daniel Craig, the latter of whom considered himself a massive fan of the band. Barbara Broccoli also tells a sombre story about Amy Winehouse coming in for a meeting about Quantum of Solace, only for her to realize the late, troubled singer was in no shape to work. We also hear Bono and The Edge’s (pretty bad) demo for the theme song to Goldeneye, which they gave to Tina Turner. Notably, everyone has a little fun with the legacy of former Bond producer Harry Saltzman, who infamously wanted Paul McCartney replaced as the vocalist on his own song – Live and Let Die.

While not the most exhaustive look at the music of James Bond, this documentary is definitely worth a watch – especially if you’re new to the franchise. Barry gets his due, as does composer David Arnold, whose tribute comes from an unlikely source – Thomas Newman – the composer who replaced him for Skyfall. It’s a good primer on this often neglected but essential element in the franchise. 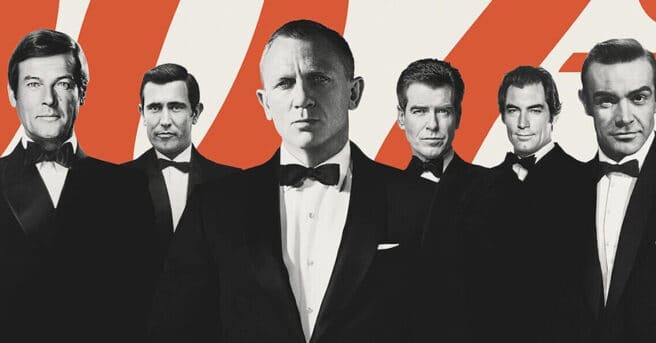 Darby and the Dead Review