Review: After years of mediocre sequels and a poorly received remake, Don Mancini’s Child’s Play franchise moved to the small screen last year with Chucky. A fun, over-the-top season that blended gory kills with some origin for Charles Lee Ray, Chucky was a cross-network hit that gained a dedicated following thanks to simultaneous airings on both USA and SyFy as well as the well-received return of Brad Dourif as the possessed Good Guy doll. With appearances from characters from throughout the franchise, Chucky ended its first season with a bang and set up the second to be even bigger and more deadly. Having seen the first two episodes, Chucky’s second season continues the style and humor of last year’s run while changing up the setting to keep things fresh.

Season two of Chucky picks up in the immediate aftermath of the first season’s finale which found Tiffany (Jennifer Tilly) and a truckload of possessed Good Guy dolls being driven away by Andy Barclay (Alex Vincent). With everything seemingly resolved, Jake Wheeler (Zackary Arthur), Devon Evans (Bjorgvin Arnarson), and Lexy Cross (Alyvia Alyn Lind) are able to get their lives back to normal. With a time jump thrown in for good measure, the trio of teen leads finds themselves once again at the mercy of Chucky who has a far more complicated plan. This time, Chucky not only is looking for revenge on the teenagers who thwarted him but on Jennifer Tilly, possessed by Tiffany, in human form.

Without getting into spoilers, Jake, Devon, and Lexy find themselves shipped off to a Catholic reform school under the tutelage of Father Bryce, played by Devon Sawa who returns after portraying two characters in the first season. With a no-nonsense nun, played by Lara Jean Chorostecki, at his side, Father Bryce tries to reform the three friends while navigating a growing body count at the hands of Chucky himself. Similarly to how Child’s Play 3 shifted the story from suburban homes to a military school, this season uses the boarding school setting as a location ripe for teenagers to interact and fall prey to Chucky. It also allows for the killer doll to revel in mocking religion and using it as fodder for creative kills as well as sacrilegious humor.

It doesn’t take long for Chucky to begin his latest murder spree with the first two episodes showcasing multiple casualties directly and indirectly killed by the doll. This series continues the trend of the adult characters all being completely useless until Chucky shows up brandishing a deadly weapon while the teens are forced to whisper and plan before the next victim is killed. The formula is tried and true and doesn’t change much from last season, but now Chucky has plenty of puns and one-liners that he can spout spoofing Catholicism. The core of this story remains Jake and he continues to struggle with his role in the deaths that surround him. At times, he can be an unbearable character to have as the focal point, but luckily we have the rest of the cast to balance things out.

This season, once again headed by Don Mancini and producer Nick Antosca, also gives us more of Jennifer Tilly chewing scenery as herself and as Tiffany as well as Fiona Dourif as Nica Pierce. The new characters added to the cast, as well as other returning franchise favorites, continue to flesh out the most balanced Child’s Play entry to date. While the movies touched on the mythology and eventually went off the rails with Seed of Chucky and Cult of Chucky, this series just has fun with the audacity of a killer doll doing what he does best. Thankfully, Devon Sawa and Brad Dourif have a lot of fun with the material and that allows the audience to have a blast too.

If you enjoyed the first season of Chucky, you will likely enjoy this one as well. The kills continue to be creative and Brad Dourif laughing maniacally is a welcome addition to any Halloween season. Having only seen the first two episodes, I cannot say for sure if this season will wrap up as strongly as it starts, but with all of the origin and flashback material handled in season one, the second season of Chucky makes no delay in letting the blood flow and having a lot of fun doing so. Chucky will never be mistaken for high art, but it has a lot of fun making a mess. 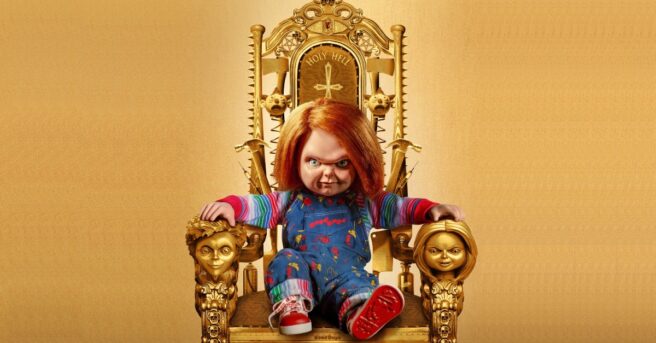 Oregon Trail being developed into a movie musical

Darby and the Dead Review

Oregon Trail being developed into a movie musical

Is Everything About Life Hinged On Luck?

Foods for Scalp Health from a Dietitian and a Trichologist