Marshall Stanmore III Bluetooth Speaker Review: Expensive, But You Know You Want It 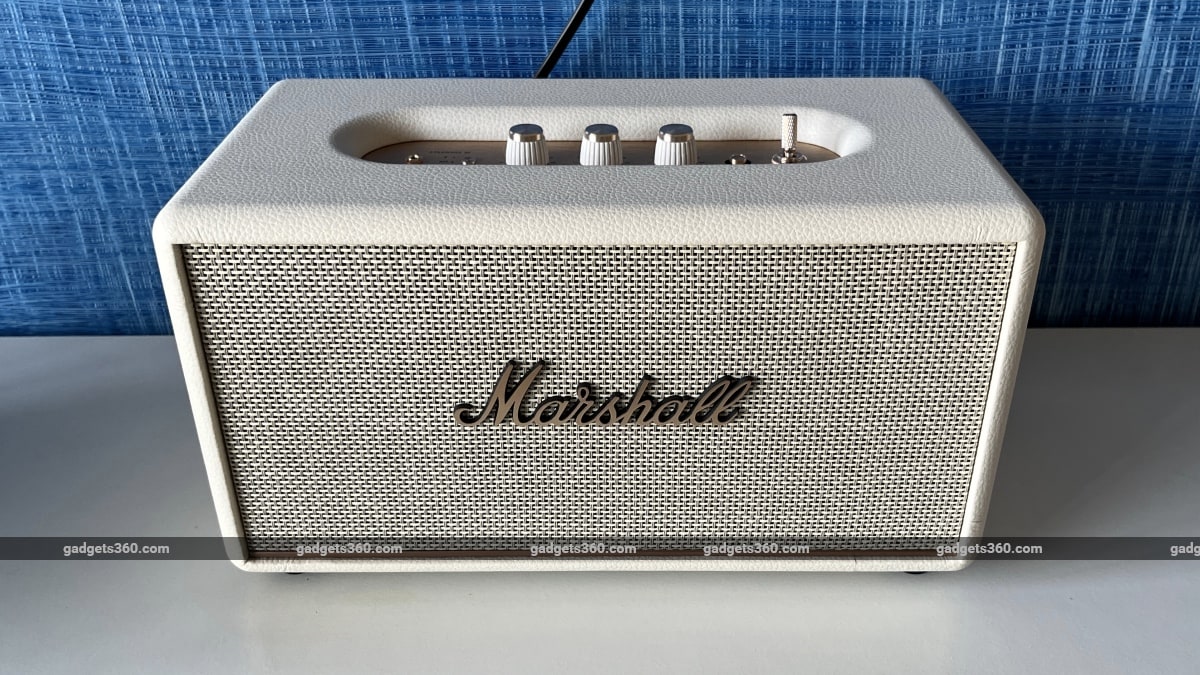 Although Marshall is best known for its guitar amplifiers, the brand also has a rather impressive presence in the personal audio segment. Marshall headphones and speakers — made by Zound Industries as part of a brand licensing agreement — try to capture the essence of the brand’s styling and sound, and my past experiences with the products have been largely positive. The product I’m reviewing today, the Marshall Stanmore III, continues with that legacy in a big, bold, and rather expensive fashion.

Priced at Rs. 41,999, the Marshall Stanmore III immediately strikes you as an incredibly good looking Bluetooth speaker. It’s also big, rather heavy, and needs to be plugged in to a power outlet to work, so don’t expect to be able to take this out and about with you. However, this also makes it a promising home entertainment option, and one that’s attractive enough to earn a place of pride in your living room. Is the Marshall Stanmore III worth the price? Find out in this review.

The Marshall Stanmore III doesn’t have a battery, and needs to be plugged in to run

What truly helps the Marshall range of speakers to stand out is the unmistakeable resemblance to the brand’s historic guitar amplifiers. This includes the boxy shape, prominent Marshall logo on the durable but flexible straw-like speaker grille up front, and beautiful leatherette finishing on the top and sides of the Stanmore III. It’s the middle product in the current third-generation lineup of home speakers from Marshall and is fairly large, but not as large as the Rs. 59,999 Woburn III.

The large size also makes the Marshall Stanmore III quite heavy, but this shouldn’t really be an issue once you’ve unpacked it and safely positioned it, since the speaker isn’t really meant to be moved around. This also means that you’ll need to plug it in to a power outlet to run — there is no battery in this speaker for completely wireless use. The bottom of the speaker has small rubber legs on the four corners, lifting it above the surface and thus reducing vibrations when in use.

Connectivity options on the Marshall Stanmore III include Bluetooth, a 3.5mm auxiliary socket at the top, and RCA sockets at the back. Also at the rear is the socket where the included power cable plugs into the speaker, the bass port for the woofer, and a vast amount of regulatory text that is quite ugly to look at. Sensible positioning of the Stanmore III can hide the back from view, and is something you should aim to do if you buy this speaker.

The controls are perhaps the most beautiful part of the Marshall Stanmore III, with interesting retro-style dials, switches, and buttons that operate various functions on the speaker. These are also digitally operational, despite the very analogue-like appearance of it all. There are separate dials to control volume, bass, and treble, a combination press-and-slider switch controls playback, and a button controls source selection.

There is also a big switch for power, and an auxiliary socket at the top for simple wired stereo connectivity with various devices. The controls are a combination of metal and plastic, but feel great to touch and use. There are also indicator lights around some of the controls such as the volume, bass, and treble levels, which light up when being used and dim to a softer glow in ordinary operation.

Companion apps for wireless speakers aren’t very common, particularly those with just Bluetooth connectivity, so it’s nice to know that there is something for the Marshall Stanmore III. That said, it’s a rather simple app that doesn’t offer a lot by way of features or customisations, and you won’t find yourself needing to open up the app too often after the initial setup of the speaker.

The key feature on the app — and perhaps the most compelling reason to even have it on your smartphone in the first place — is placement compensation. You can select if the Marshall Stanmore III is placed close to an edge or wall, and accordingly it will tweak the sound to compensate for that. It did seem to make a slight difference in improving the sound when properly adjusted, so it’s worth going through the process for it.

The Marshall app doesn’t do much, with only the placement compensation feature coming in handy

The second feature is the equaliser, which allows you to adjust the bass and treble levels on the speaker. It’s worth pointing out that the bass and treble dials on the Marshall Stanmore III do the exact same thing, and are arguably much easier to use than the app. Apart from this, the app also displays playback information, but offers little else beyond this.

Marshall’s products are typically priced at a premium above the competition, and the Stanmore III is no different in this regard. At Rs. 41,999, it’s undeniably expensive, especially when you consider that it’s largely meant to be used as a Bluetooth speaker, and has no Wi-Fi connectivity or smart functionality. However, the attractive design isn’t all that’s there is to it; the sheer size and power of the speaker means that audio performance lives up to my rather high expectations.

Despite support for only the SBC codec, the Marshall Stanmore III sounds rather good — assuming you’ve tweaked the equaliser a bit. The on-device dials make this quite easy, and I found that turning up the treble by around four points made all the difference in making the sound a lot more balanced and enjoyable.

The back of the Marshall Stanmore III isn’t very nice to look at, but you’ll likely be able to hide it with proper positioning

The natural sound with no equaliser modifications sounded a bit bass-heavy, and didn’t give the Marshall Stanmore III’s excellent highs a chance to shine. The speaker fortunately retains the equaliser settings even when switched off and on again. Tweaking the bass level made for more punch and attack, which might appeal to a lot of users, but it’s the impressive mids and highs that defined the sound on the Stanmore III for me.

Listening to Tick Tock by Clean Bandit, the vocals sounded sharp and clear, while the high frequencies hit home capably without sounding at all shrill or unpleasant. The violin riffs and rhythmic vocals played well together, with the former sounding almost real and present even in my living room. The gentle rumble and drive of the lows — already a bit bumped up as compared to the rest of the frequencies — added the calculated and refined aggression that the track deserved.

The refinement in the sound was even more pronounced with A.R. Rahman’s Mausam & Escape from the Slumdog Millionaire soundtrack, which also revealed the spaciousness of the soundstage and the ability to create a wide, detailed sonic image. The ‘drop’ involving the iconic sitar riff in the track highlighted the excellent tuning efforts that Marshall has put into the Stanmore III, providing a wider soundstage and more engaging sound than I’ve heard from most speakers, short of full-sized soundbars.

All of this is complemented by the fact that the Marshall Stanmore III can get very loud. I usually had the speaker playing at around the 50 to 60 percent volume level, which made for a sound that not only filled my living room, but could be heard fairly clearly and loudly from even 10-15m away in other rooms. Higher volume levels of around 80 percent were impressively free of any audible distortion or issues, and sounded immersive, punchy, and attention-grabbing like nothing else of this kind.

Sound quality with an auxiliary connection was expectedly a bit better than with Bluetooth, but the difference wasn’t significant. The speaker isn’t geared so much around detail and nuance as it is around the sonic signature itself, and I preferred the convenience of Bluetooth given the characteristics of the sound. That said, wired connectivity is a convenient option to have, particularly the RCA sockets which make connectivity with a television or home entertainment systems a bit easier for those who want it.

The Marshall Stanmore III is an unusual product in 2023 given its Rs. 41,999 price, and the lack of Wi-Fi-based connectivity and streaming options which typically justify that kind of price tag. However, that doesn’t make it any less appealing; the retro-style design, impressive build quality and use of premium materials, and the enjoyable sound make this a simplicity-driven home speaker that focuses on the core functionality to good effect.