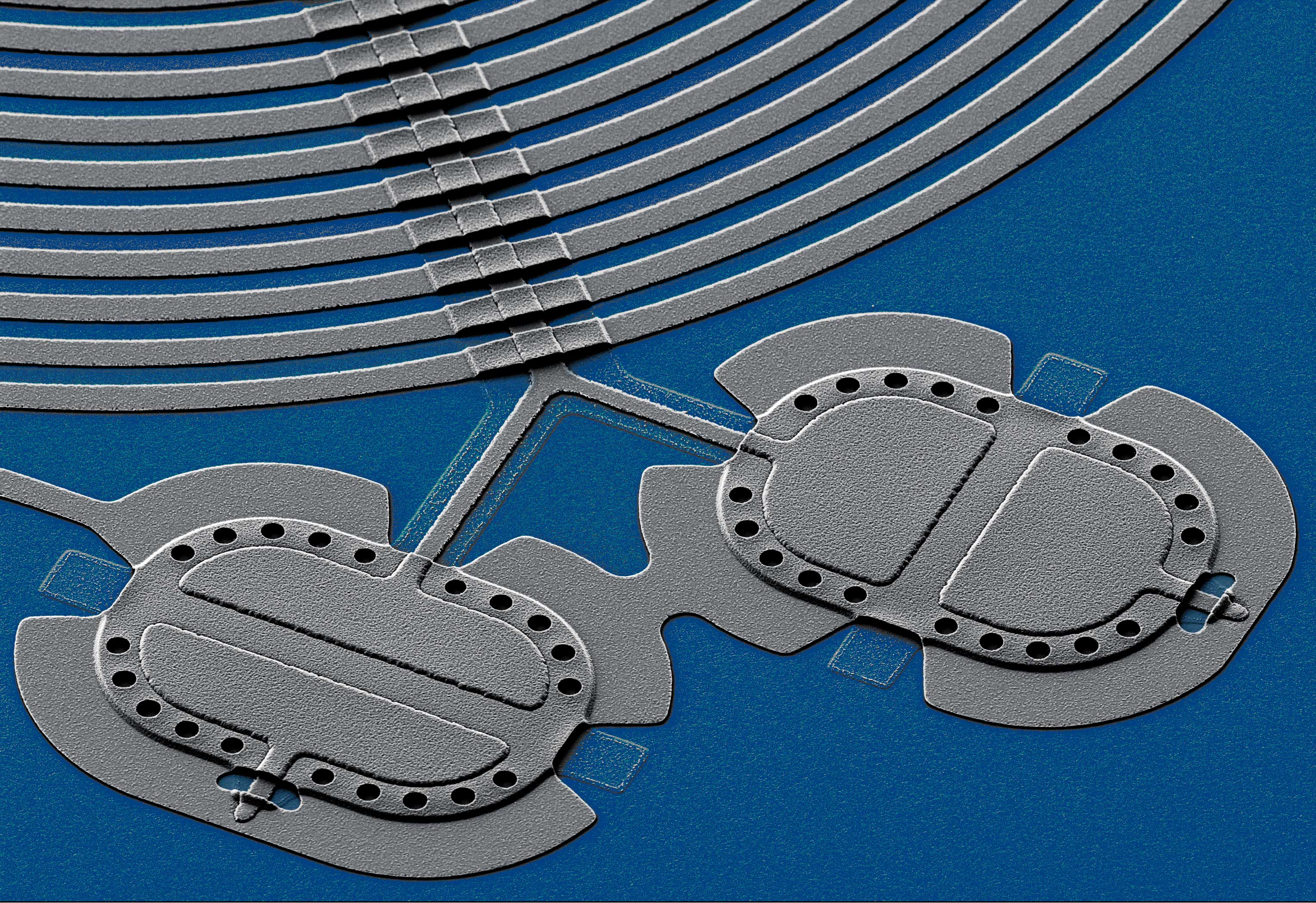 Like conductors of a spooky symphony, researchers at the National Institute of Standards and Technology (NIST) have “entangled” two small mechanical drums and precisely measured their linked quantum properties. Entangled pairs like this might someday perform computations and transmit data in large-scale quantum networks.

The NIST team used microwave pulses to entice the two tiny aluminum drums into a quantum version of the Lindy Hop, with one partner bopping in a cool and calm pattern while the other was jiggling a bit more. Researchers analyzed radar-like signals to verify that the two drums’ steps formed an entangled pattern — a duet that would be impossible in the everyday classical world.

What’s new is not so much the dance itself but the researchers’ ability to measure the drumbeats, rising and falling by just one-quadrillionth of a meter, and verify their fragile entanglement by detecting subtle statistical relationships between their motions.

The research is described in the May 7 issue of Science.

Physics World, the news outlet of the U.K.’s Institute of Physics, awarded its 2021 “Breakthrough of the Year” to two independent teams, including one from NIST, for quantum entanglement of two vibrating drumheads. Read more about the award at the Physics World website.

“If you analyze the position and momentum data for the two drums independently, they each simply look hot,” NIST physicist John Teufel said. “But looking at them together, we can see that what looks like random motion of one drum is highly correlated with the other, in a way that is only possible through quantum entanglement.”

Quantum mechanics was originally conceived as the rulebook for light and matter at atomic scales. However, in recent years researchers have shown that the same rules can apply to increasingly larger objects such as the drums. Their back-and-forth motion makes them a type of system known as a mechanical oscillator. Such systems were entangled for the first time at NIST about a decade ago, and in that case the mechanical elements were single atoms.

Since then, Teufel’s research group has been demonstrating quantum control of drumlike aluminum membranes suspended above sapphire mats. By quantum standards, the NIST drums are massive, 20 micrometers wide by 14 micrometers long and 100 nanometers thick. They each weigh about 70 picograms, which corresponds to about 1 trillion atoms.

Entangling massive objects is difficult because they interact strongly with the environment, which can destroy delicate quantum states. Teufel’s group developed new methods to control and measure the motion of two drums simultaneously. The researchers adapted a technique first demonstrated in 2011 for cooling a single drum by switching from steady to pulsed microwave signals to separately optimize the steps of cooling, entangling and measuring the states. To rigorously analyze the entanglement, experimentalists also worked more closely with theorists, an increasingly important alliance in the global effort to build quantum networks.

The NIST drum set is connected to an electrical circuit and encased in a cryogenically chilled cavity. When a microwave pulse is applied, the electrical system interacts with and controls the activities of the drums, which can sustain quantum states like entanglement for approximately a millisecond, a long time in the quantum world.

For the experiments, researchers applied two simultaneous microwave pulses to cool the drums, two more simultaneous pulses to entangle the drums, and two final pulses to amplify and record the signals representing the quantum states of the two drums. The states are encoded in a reflected microwave field, similar to radar. Researchers compared the reflections to the original microwave pulse to determine the position and momentum of each drum.

To cool the drums, researchers applied pulses at a frequency below the cavity’s natural vibrations. As in the 2011 experiment, the drumbeats converted applied photons to the cavity’s higher frequency. These photons leaked out of the cavity as it filled up. Each departing photon took with it one mechanical unit of energy — one phonon, or one quantum — from drum motion. This got rid of most of the heat-related drum motion.

To create entanglement, researchers applied microwave pulses in between the frequencies of the two drums, higher than drum 1 and lower than drum 2. These pulses entangled drum 1 phonons with the cavity’s photons, generating correlated photon-phonon pairs. The pulses also cooled drum 2 further, as photons leaving the cavity were replaced with phonons. What was left was mostly pairs of entangled phonons shared between the two drums.

To entangle the phonon pairs, the duration of the pulses was crucial. Researchers discovered that these microwave pulses needed to last longer than 4 microseconds, ideally 16.8 microseconds, to strongly entangle the phonons. During this time period the entanglement became stronger and the motion of each drum increased because they were moving in unison, a kind of sympathetic reinforcement, Teufel said.

Researchers looked for patterns in the returned signals, or radar data. In the classical world the results would be random. Plotting the results on a graph revealed unusual patterns suggesting the drums were entangled. To be certain, the researchers ran the experiment 10,000 times and applied a statistical test to calculate the correlations between various sets of results, such as the positions of the two drums.

“Roughly speaking, we measured how correlated two variables are — for example, if you measured the position of one drum, how well could you predict the position of the other drum,” Teufel said. “If they have no correlations and they are both perfectly cold, you could only guess the average position of the other drum within an uncertainly of half a quantum of motion. When they are entangled, we can do better, with less uncertainty. Entanglement is the only way this is possible.”

“To verify that entanglement is present, we do a statistical test called an ‘entanglement witness,’’’ NIST theorist Scott Glancy said. “We observe correlations between the drums’ positions and momentums, and if those correlations are stronger than can be produced by classical physics, we know the drums must have been entangled. The radar signals measure position and momentum simultaneously, but the Heisenberg uncertainty principle says that this can’t be done with perfect accuracy. Therefore, we pay a cost of extra randomness in our measurements. We manage that uncertainty by collecting a large data set and correcting for the uncertainty during our statistical analysis.”

Highly entangled, massive quantum systems like this might serve as long-lived nodes of quantum networks. The high-efficiency radar measurements used in this work could be helpful in applications such as quantum teleportation — data transfer without a physical link — or swapping entanglement between nodes of a quantum network, because these applications require decisions to be made based on measurements of entanglement outcomes. Entangled systems could also be used in fundamental tests of quantum mechanics and force sensing beyond standard quantum limits.

Criteo DevX Days: why and how we organized an internal conference to improve the Developer Experience | by Michaël Sanchez | Criteo R&D Blog...