PLOT: Sonic is back, and he has a new baddie to contend with. When a tough little fellow called Knuckles brings Dr. Robotnik back from the mushroom planet, a brand new battle must be fought here on Earth. Is the little Hedgehog fast enough? You’ll have to see it to find out.

REVIEW: When Sonic the Hedgehog arrived in theatres, it was a massive surprise for moviegoers. It’s not an easy feat to make a satisfying moviegoing experience out of a video game, and the examples of this are numerous. Yet, with the utter charm of Ben Schwartz voicing the speedy little creature, and excellent performances from both Jim Carrey and James Marsden, it all worked. Lightning can’t strike again, can it? Get yourself ready for another charming flick from all the fine folks involved. Sonic the Hedgehog 2 manages to build on what worked the first time around. While a couple of less-than-engaging storylines feel a bit forced, this is a sequel that is fun, lighthearted, and mostly laughs aplenty. And it may even offer old-school fans a moment of excitement for what’s to come.

Remember what happened the last time? The evil Dr. Ivo Robotnik (Carrey) was stuck on some oddball mushroom planet. Bound forever to be on his own. However, with his smarts, he creates a signal to reach out to anybody who may be listening. And yes, somebody is listening. Once the nutty doctor meets Knuckles (voiced by Idris Elba), the two go after the lovable Sonic. Sonic, meanwhile, has a far more exciting adventure going on. He’s being left alone at his house for the first time while Tom and Maddie (James Marsden and Tika Sumpter) go to a wedding. Expectedly, Sonic finds himself facing off against Robotnik and Knuckles, both of whom are in search of a precious stone that can bring unlimited power to whoever possesses it. Thankfully our hero gets a little help from a spunky stranger named Tails (Colleen O’Shaughnessey). Let the adventure begin!

What’s impressive about this sequel is how easily it recaptures much of the magic from the first film. A large part of that is the cast itself. Jim Carrey is fantastic here. The actor is having a blast taking on the arrogant and insane doctor. And now, he’s working alongside Idris Elba, and he adds yet another level to this crazy world. Then there is James Marsden and Tika Sumpter. The two are especially good together. While they disappear for most of the first half, they play a prominent role in the last. And then there are the side players. Adam Pally is so good here that it’s a shame he feels underused. And then there is Natasha Rothwell, who has a bit of fun this time around with a new character named Randall (played by Sherman Moore).

Much of the spotlight is on the great Jim Carrey. And deservedly so. Yet the main element that works is the perfect casting of Ben Schwartz. The actor brings everything to the character, making Sonic a terrific hero. He is funny, weird, vulnerable, and even a little heroic when necessary. The actor gives a fully fleshed-out performance as Sonic. He offers another inspired show considering the little guy has to be a hero with humor and heart. And once the film finds its way to the final act, it all comes together for a satisfying end to a fun little movie with only a few bumps that threaten to lessen the energy.

With director Jeff Fowler and screenwriters Pat Casey and Josh Miller returning, this time around they are joined by John Whittington. The script still manages to make the game come to life. Yet the wedding sequence and the silliness involved don’t quite come together. It felt wholly silly, and it only made for a couple of moments of humor. As uninspired as it is, at least it doesn’t distract too much from what works. And what does work is enough to make this a successful sequel, if not quite as engaging as the first film. That said, the fact that they could make these characters continue to shine is impressive. They also do a terrific job of playing towards the game fans with a ton of little surprises that even had more than a few critics cheering. Critics cheering in a press screening can say a lot, folks.

Sonic the Hedgehog 2 is a great companion piece to the original film. The two features are good examples of how you can do a videogame adaptation right. Audiences may find, to their delight, that many of the elements that worked the first time around are here. Fowler and co-writers captured much of the same magic as before. Aside from a lame subplot about a wedding, this is an entertaining continuation. And you can’t do better than this cast. It’s a joy to see the humor and heart of the first carried over by Schwartz, Carrey, Marsden, Sumpter, and all the new and returning performers. If you enjoyed the first film, you’ll most likely be a fan of this. Rejoice Sonic fans, this is becoming the charming little franchise that could. 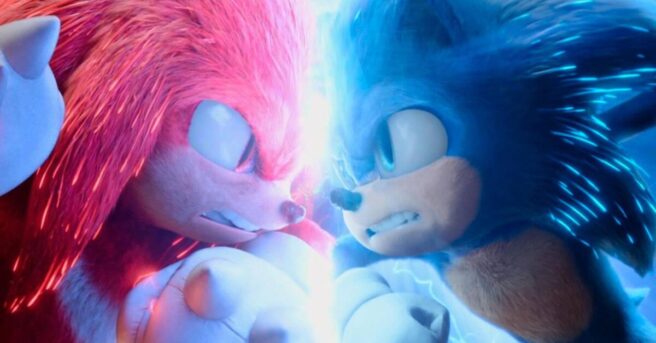