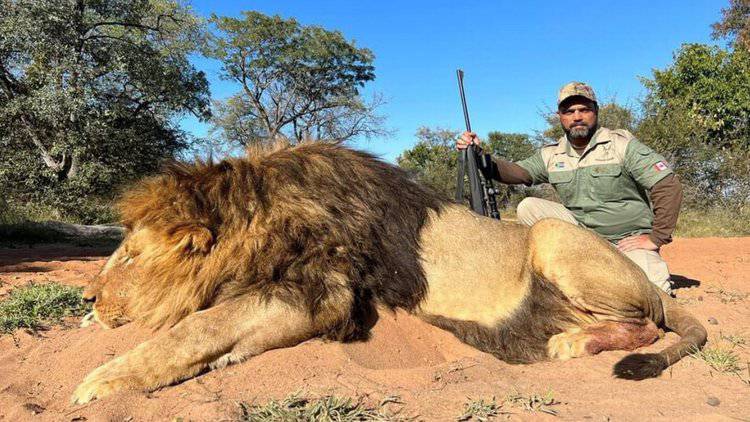 Posing for a vile photo, here is a Briton who slaughters magnificent animals such as this lion on African hunting holidays.

Serial trophy hunter Syed Rizwan, 44, has been on hunts all over the world, his last just before Christmas, part of an industry that has led to more than 1.7 million animals being killed for sport in a decade.

In another disturbing picture, the director of luxury chauffeur service Montclares Ltd, is seen holding up the head of a slayed giraffe just minutes after it fell to the floor.

Posing for another snap on the same trip, Rizwan is captured sitting on top of the dead creature.

The father of three from Rainham in Essex listed his hobbies on Facebook as “hunting”, “skeet shooting” and “fishing” next to a profile picture of him holding the mane of a dead lion in South Africa. He removed this image once the Mirror, which is running a campaign to End Trophy Hunting, contacted him.

Another Facebook photo showed Rizwan standing over a dead black bear while holding a rifle.

In another post, he wrote “out with the little hunter again” next to dozens of images of his son at hunts in the UK, including one of the youngster smiling next to a dead deer.

Even Rizwan’s car number plate ends with the letters “GUN”.

Eduardo Goncalves of the Campaign to Ban Trophy Hunting said: “Who in their right minds shoots a gentle giraffe or a bumbling buffalo for a laugh?

“This is why MPs and Lords must back the Bill to ban British hunters bringing home these sick souvenirs.

“If Rizwan killed his neighbour’s cats for fun, we would put him in prison without a moment’s thought.

“People who kill lions for fun should be punished the same way.”

Speaking to Rizwan at his home this week, he accepted many Britons think trophy hunts are controversial but said “they don’t understand everything that goes on”.

He said the industry protects wild creatures such as rhinos from falling into the hands of poachers.

Rizwan added: “There are people in South Africa who are protecting these species. This is why these animals are still there because they have interest in them. Out of 10 rhinos, they will sell the old bull to a hunter for about $100,000, which not only gives them a salary but also an interest to protect them.”

He added: “What about animals that people shoot in this country? What difference does it make to you when a life has been taken whether it is a lion or a deer?”

Rizwan dismissed claims of dwindling lion numbers, comparing African hunts to UK pheasant shoots where the birds are “reared for the hunt” and therefore do not affect the wild population.

He said: “What I hate about these people [anti-trophy hunting] is that if you kill a deer that is fine but if you kill a zebra or a giraffe, they are seen as more beautiful. This is stupid.

“Have you been to a UK slaughterhouse and seen the way they kill animals? Dying in agony.

“The way they have been killed is worse than hunters as we have to shoot with special bullets so the animal dies straight away. It is definitely more humane.”

He continued: “As far as I am concerned the licence has been given to me and whatever I did is legal.

“The country these animals belong to, let them decide what is best for them. British and Americans should not interfere.

“What you are doing [with your campaign] is wrong.

“You are not helping the animals. You are putting them more in danger.”

What the law says

Despite the increasing threat to many species, there is a loophole allowing the movement of hunting trophies in the international agreement on animal protection.

The Convention on International Trade in Endangered Species bans the trade, import and export of the body parts of endangered animals, other than in exceptional circumstances.

But animals killed by trophy hunters are exempt from these rules.

In 2019, the Mirror joined forces with the Campaign to Ban Trophy hunting.

Since then it has received the backing of cross-party MPs, Peers and celebs including Joanna Lumley, Ricky Gervais and Dame Judy Dench.

The bill is now at committee stage and it is expected to be discussed on Jan 25th.

Conservative Henry Smith, MP for Crawley, who introduced the landmark bill said it would “put in place the toughest ban on hunting trophies anywhere in the world”.

He added: “It has the support of cross-party MPs, animal welfare and conservation groups, and British voters. It is time to put an end to this disgrace once and for all.

“It’s wrong to think trophy hunting is just something that Americans do.

British trophy hunters like Syed Rizwan are shooting lions, giraffes and bears just to bring their bodies back home and show off. This is nothing to be proud of, and is making things worse for threatened species. British trophy hunters are among the worst in the world when it comes to killing elephants, a species that has just been declared endangered on the conservation Red List.

“The Mirror’s campaign has helped get us to the brink of victory. But there are still MPs who need convincing. I urge the Mirror’s amazing readers to get in touch with their local MP today and tell them in no uncertain terms that this has to stop – now.”

This article by Nada Farhoud was first published by The Mirror on 13 January 2023. Lead Image: Syed Rizwan posing with a lion he gunned down.

What you can do

Support ‘Fighting for Wildlife’ by donating as little as $1 – It only takes a minute. Thank you.

Fighting for Wildlife supports approved wildlife conservation organizations, which spend at least 80 percent of the money they raise on actual fieldwork, rather than administration and fundraising. When making a donation you can designate for which type of initiative it should be used – wildlife, oceans, forests or climate.

Why Weasels Should be the New Poster Animal for Biodiversity Conservation