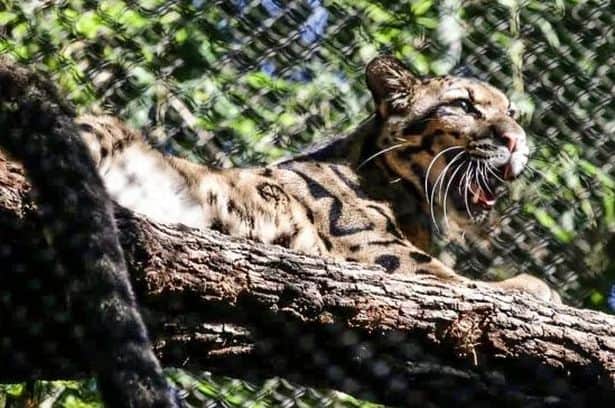 A clouded leopard that escaped its enclosure at a zoo in the US state of Texas has been found following an extensive search which resulted in the zoo going into lockdown.

The leopard was eventually located not far from its enclosure following several hours of frantic searching.

The zoo said that the animal does not appear to have any injuries.

Police attended Dallas Zoo on Friday when it became apparent that the predatory cat had managed to get out of its pen and was likely hiding somewhere within the grounds.

The animal, called ‘Nova’, was described as weighing about nine to eleven kilograms and reportedly did not pose a risk to humans.

In a statement on Twitter, the zoo said: “We are thrilled to report we located clouded leopard Nova on-grounds at the Zoo this afternoon at approximated 4:40 p.m,” they said in a tweet.

“She was located very near the original habitat, and teams were able to safely secure her just before 5:15 p.m.

“Initial indications are she is not injured. She is being evaluated by our veterinary staff right now. We’ll provide further updates on her status tomorrow.”

Prior to the discovery, Harrison Edell, the zoo’s executive vice president of animal care and conservation, said that the search teams were focusing on trees, which clouded leopards like to climb.

The zoo had called the situation “serious” but insisted that there was no threat to public safety.

“If anything, she’s real nervous and afraid of people,” Edell told the Associated Press.

It is unclear how the animal escaped its closure.

Animals have managed to escape their enclosures at Dallas Zoo in the past.

The incident resulted in three people being injured and the police being forced to shoot the animal dead.

This article by Will Maule was first published by The Mirror on 14 January 2023. Lead Image: Nova, a clouded leopard, was missing for at least six hours from her compound at Dallas Zoo.

What you can do

Support ‘Fighting for Wildlife’ by donating as little as $1 – It only takes a minute. Thank you.

Fighting for Wildlife supports approved wildlife conservation organizations, which spend at least 80 percent of the money they raise on actual fieldwork, rather than administration and fundraising. When making a donation you can designate for which type of initiative it should be used – wildlife, oceans, forests or climate.

Why Weasels Should be the New Poster Animal for Biodiversity Conservation

Can You Redeem Hotel Points For Others?