Was the US Navy’s Littoral Combat Ship a mistake? 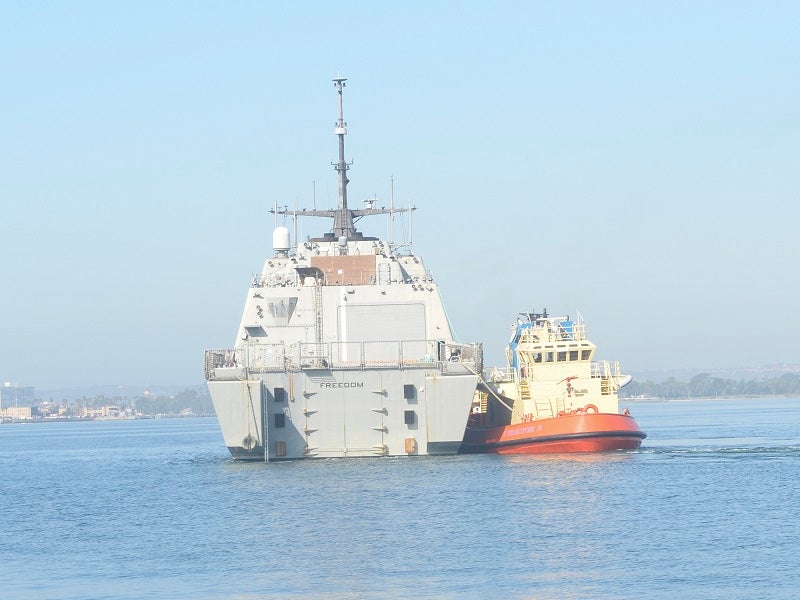 The US Navy’s Littoral Combat Ship (LCS) programme described a new naval dawn at its outset, offering a two-variant class of warship intended to operate in the seas and oceanic littorals, a smaller vessel for presence, interdiction, and maritime security operations where an Arleigh Burke-class destroyer might be considered overkill.

With the twin designs in a single LCS ‘class’, the programme created the monohull Freedom– and the trimaran Independence-class variants, each broadly intended to fulfill a similar set of missions but using dramatically different platforms to achieve the goal. With construction beginning on the Freedom-class LCS 1 (USS Freedom) and Independence-class LCS 2 (USS Independence) in 2005 and 2006 respectively, they were similarly spaced in their commissioning into service, with the USS Freedom joining the US Navy in November 2008 and the USS Independence following in January 2010.

Overall, the LCS programme envisages around 32 vessels to be built for the US Navy, split across the two variants, with Lockheed Martin’s Fincantieri Marinette Marine building the steel-hulled Freedom-class (odd-numbered) vessels and Austal USA responsible for manufacture of the aluminium Independence-class (even-numbered) hulls. As described by the US Navy, the LCS platform is intended to be capable of supporting forward presence, maritime security, sea control, and deterrence operations, and operate independently or as part of a networked force in “high-threat environments”.

The platform was, in part, intended to fill the naval surface ship gap left by the outgoing Oliver Hazard Perry-class guided missile frigates, sturdy platforms that have found new homes in navies around the world following their removal from US Navy service.

Furthermore, both the Freedom and Independence LCS variants remained “operationally unsuitable due to low reliability and availability caused by propulsion failures”.

An earlier 2019 report into the LCS programme by the US Congressional Research Service (CRS) stated that the total of 35 LCSs was three more hulls than the 32 the US Navy said it required under the 355-ship fleet plan, which was intended to uplift the size of the service to compete against its international rivals, particularly China. According to the US CRS, as of November 2022 the USN had 292 vessels in its fleet.

The 2019 CRS report stated that the LCS programme had been “controversial” due to “past cost growth, design and construction issues with the first LCSs”, with “concerns” about the class’s survivability, armament, and whether it would be able to perform its stated mission set effectively.

The difficulties experienced by the LCS also appear in part to have been the motivation behind the US decision to initiate the FFG(X) programme, now known as the Constellation class, which will deliver up to 20 frigates into USN service. The US knowingly undertook a frigate capability gap with the retirement of the Oliver Hazard Perry class in the 2010s, a type well-regarded for its seakeeping durability, with its sights focused on the development of the LCS.

At between $500-600m per ship, the Constellation class is around 50% more expensive per ship than the LCS, although as a much larger warship (7,200t fully loaded) than the Independence variant (3,400t full loaded) and Freedom variant (~3,500t), it necessarily has greater capability, and crucially, survivability.

Freedom on the block

With all the above difficulties, the LCS programme has been operating on borrowed time for a while, with operational and sustainment issues plaguing the class in USN service. Already, three of the first four ships in the LCS programme, the Freedom-class variants USS Freedom, and Independence-class ships USS Independence and USS Coronado, have been decommissioned, having remarkably been built as test and evaluation platforms. The USS Coronado is the most recently decommissioned in September 2022, having only joined the fleet in April 2014.

According to an official USN report to the US Congress on the annual plan for construction of naval vessels for FY2023, nine Freedom-class LCS (USS Forth Worth, USS Milwaukee, USS Detroit, USS Little Rock, USS Sioux City, USS Wichita, USS Billings, USS Indianapolis, and USS St Louis) will be decommissioned this year and placed into reserve.

Despite the warships having a nominal 25-year service life, only Forth Worth (LCS 3) will have made it into double figures (12 years), with the USS St Louis expected to be removed from active service after just three years in operation. In 2024, it is planned that the Independence-class LCS USS Jackson (LCS 6) will be decommissioned after just nine years in service.

However, the Independence class have seemingly fared better, with no similar decommissioning process planned to be undertaken by the USN. Speaking with Naval Technology at the end of 2022, Craig Hooper, founder of the US-based Themistocles Advisory Group defence consultancy, said that while both LCS classes were not likely to be in USN service for long, it was “pretty clear” that the Freedom class would be the first to be removed from operations.

In addition, the use of the first four vessel in the LCS programme as trials ships, according to Hooper, enabled the USN to “understand the basic parameters” of the class.

“The first examples of the LCS taught the US Navy about the basic hull form. For example, the first two Freedom-class vessels taught the navy a lot about innate stability and endurance challenges in the Freedom platform – LCS 1 had to have buoyancy ‘add ons’ to the stern, and subsequent models grew in size by a good percentage,” Hooper explained.

“The navy learned that the hullform, given its weight, took a lot of energy to get up on a plane, and that the platform used a lot of fuel. Both LCS 1 and 3 began to reveal the innate engineering shortfalls of the Freedom’s powertrain.”

Regarding the trimaran Independence variant, Hooper said the USN learned a significant amount about the type’s maintenance requirements, including that anti-corrosion for the preceding Oliver Hazard Perry class were “not directly transmissible” to the LCS. This included an understanding that sacrificial anodes needed to be replaced more frequently, while electrical current needed to be managed at the pier “to prevent the LCS becoming a sacrificial anode for the pier itself”.

Hooper also considered that the use of the first four in class as trials ships allowed the USN to test the usability of the differing combat management systems across the LCS variants.

“Outside of allowing the navy to better understand the operational parameters of each class, my sense is that one of the bigger things the navy learned from the first four LCS models was that they didn’t want the Independence class combat system and electronic backbone, and that the Freedom’s Aegis-derived operating platform made a better match,” Hooper said.

Has the LCS worked?

It should not be forgotten that the LCS variants have, aside from operational taskings when available, served as useful test platforms for a variety of technologies, including uncrewed mine countermeasure payloads, that will go on to serve as a backbone of the USN in the future. Any lessons learned in how the platforms have operated will stand the service in good stead, and indeed have already done so, with the USN opting to procure the Constellation-class frigate, which is based on the mature European FREMM design.

“Sometimes we just build duds. When clutching pearls over the LCS, it’s always helpful to remember the fate of the troubled Osprey-class minehunter. We built 12 of them, and they only lasted between 8-13 years before leaving the US fleet,” said Hooper, referring to a 1990s-era class of warship that served briefly with the USN before being sold overseas.

In a 24 February report last year into the LCS programme the US Government Accountability Office (GAO) stated that the fleet had “not demonstrated the operational capabilities” required to perform the missions sets the class was originally designed to undertake. Significant challenges were found during testing, including the LCS’s ability to operate in contested environments, as well as delays in the mission modules that would contribute so much to the type’s planned capability.

With a “comprehensive plan to address the various deficiencies”, the LCS would remain “at risk” of being unable to operate in its intended environment and be dependent in combat situations on the protection of multi-mission warships. Over the lifetime of the programme, the US GAO stated that the USN estimated that the LCS would cost over $60bn to operate and support the planned 35 LCS vessels.

For Hooper, it was unlikely that the remaining LCS across the Freedom– and Independence-classes would be retained for the normal service life. “Unless a geopolitical challenge emerges that makes small island/archipelago patrols under a protective air bubble a priority – say a Chinese naval base in the Caribbean or a major effort to militarise the Solomons Islands – the Freedom class is on the way out.

“The engine refits to resolve a Freedom class class-wide defect are still ‘notional’ fixes, with the on-hull reliability yet to be tested. The change of bearing type, in general, requires more maintenance, which the navy has struggled to provide in general. The endurance challenges on the Freedom are insurmountable,” Hooper stated.

In comparison, the trimaran Independence class “has fewer immediately fatal flaws”, with the variant operating in the US Navy’s most important area of operations: the Pacific. The Independence class is homeported in San Diego on the west coast, and also undertakes a standing rotational deployment to Sembawang naval facility in Singapore.

“Ultimately, the lifespan of the Independence LCS largely depends upon the success of the FFG-62 [Constellation] class. If the FFG-62 is more immediately successful, we will see these vessels depart the fleet quickly,” Hooper said.

The half-life of the LCS

As the LCS has developed over the years, with use cases dreamt up and subsequently deemed beyond the class by observers, the remaining vessels in service will continue to serve new functions in the USN. Where other nations could opt to send warship types such as offshore patrol vessels, the LCS could perform a similar function for the USN, operating in US presence taskings in regions such as the littorals of the Asia-Pacific, or perhaps along the eastern shores and into the Caribbean.

“The role of the LCS has already changed, and it will change again a couple of times before it leaves the fleet entirely. Certainly, unmanned will gobble up LCS missions, but, before we get there, the Independence class has a lot of potential in sensor-seeding, smaller unmanned ISR deployments and other monitoring and presence-based tasks,” said Hooper.

“It is a platform caught in the centre of a number of emergent technologies and platforms, yes, but, at the end of the day, I think there’s a good bit of use in having basic manned platforms out there, in the islands of the Pacific, doing engagement and various ISR tasks.”